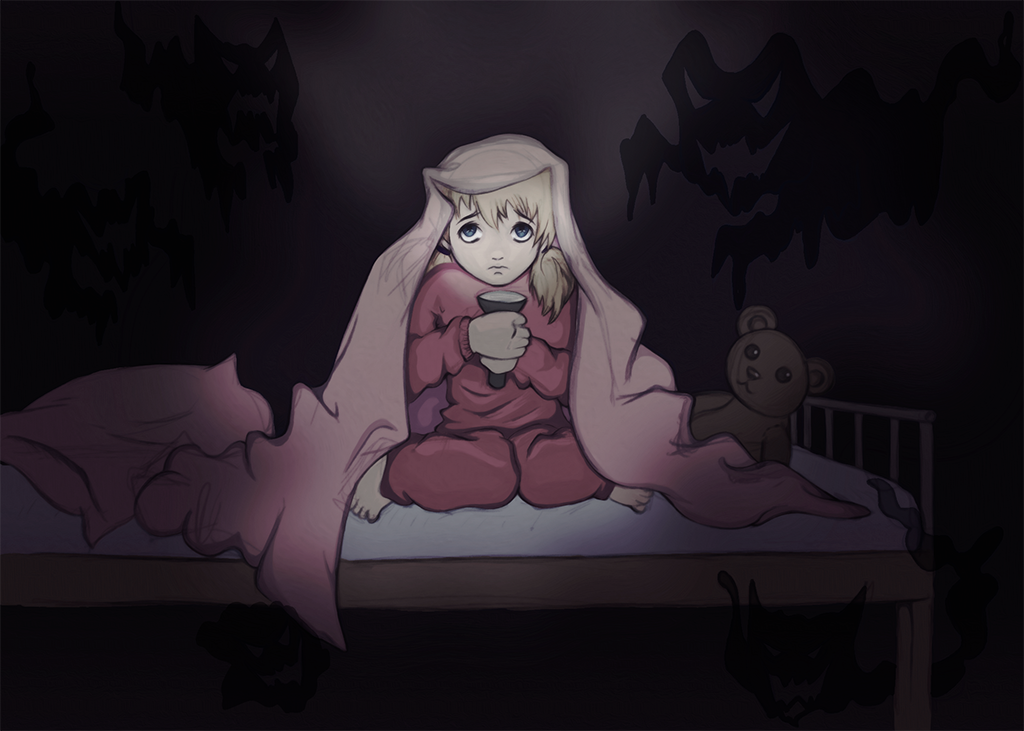 We were brainstorming new ideas for our next game project and we were actually thinking of a completely different type of a game, when we started talking about what really would be the 'pick up and play' type of controls we wanted to do for a mobile game. Just something that could be done by simply tapping the screen. And one of use mentioned that the gesture of tapping the screen looked like toggling a flashlight on and off.

Imagination and inspiration sparked immediately. What could we use a flashlight for? To light the darkness, of course! Why would we need to do that? Because there are monsters! What the heck, why would there be monsters? Because you are a little child, afraid of the dark and trying to survive. Just you and the flashlight.

I was actually so smitten with the idea, I instantly had a very specific image in mind and drew that as the first concept art for the game within the next day.  And although we did go through a proper concept planning and testing phase, we actually ended up using that very image as the basis of our whole game scene. The hand-drawn look  and sketchy feel was expanded to cover the whole game visuals.

Of course, the whole game couldn't be just about the flashlight, no matter how simplistically appealing that first sounded. The flashlight would run out of batteries, so the player would need to purchase more of them. And we didn't want the monsters to instantly kill the character, instead they would slowly (or not so slowly) drive her mad, or -as we later decided- deplete her of all courage to fight on. Early on we talked about allowing the player to give her some comfort food, like chocolate, to regain her vitality. But in the end we went with something a bit different.

We want the game to be intense, so you'd want to protect the girl, with no distractions. So although the setting inspired an intricate story about her situation, we didn't want to slap it onto the player as a wall-of-text. Instead, we found a bit more subtle way to convey it. In-between the nights (game levels, if you want to call them such), the player can get a glance at the girl's diary, or hear bits of conversation between her parents. Those can reveal clues about what is really going on.

It took us a while to settle on a name for her. She was 'the girl' (yes, very Birdboxian of us) for a long time. Finally, we took a liking to Alina, which is derivative of Helen, a name with a connection to light.

So, follow us along the path to releasing Alina to the public! :) Stay tuned.