Once we had the idea for this game, we needed to define the enemies of the game: what comes out of the shadows. We had quite a few discussions about this and there were a few different options that we considered until going with the current design.

One idea we toyed with was making different types of monsters for each week in the game. In this option, every night would have started with a bedtime story that was being read to Alina. Each week would have had a different story and the stories would be the thing that fueled Alina's imagination to conjure the monsters. Therefor, for each week the monsters would reflect the theme of the bedtime story. 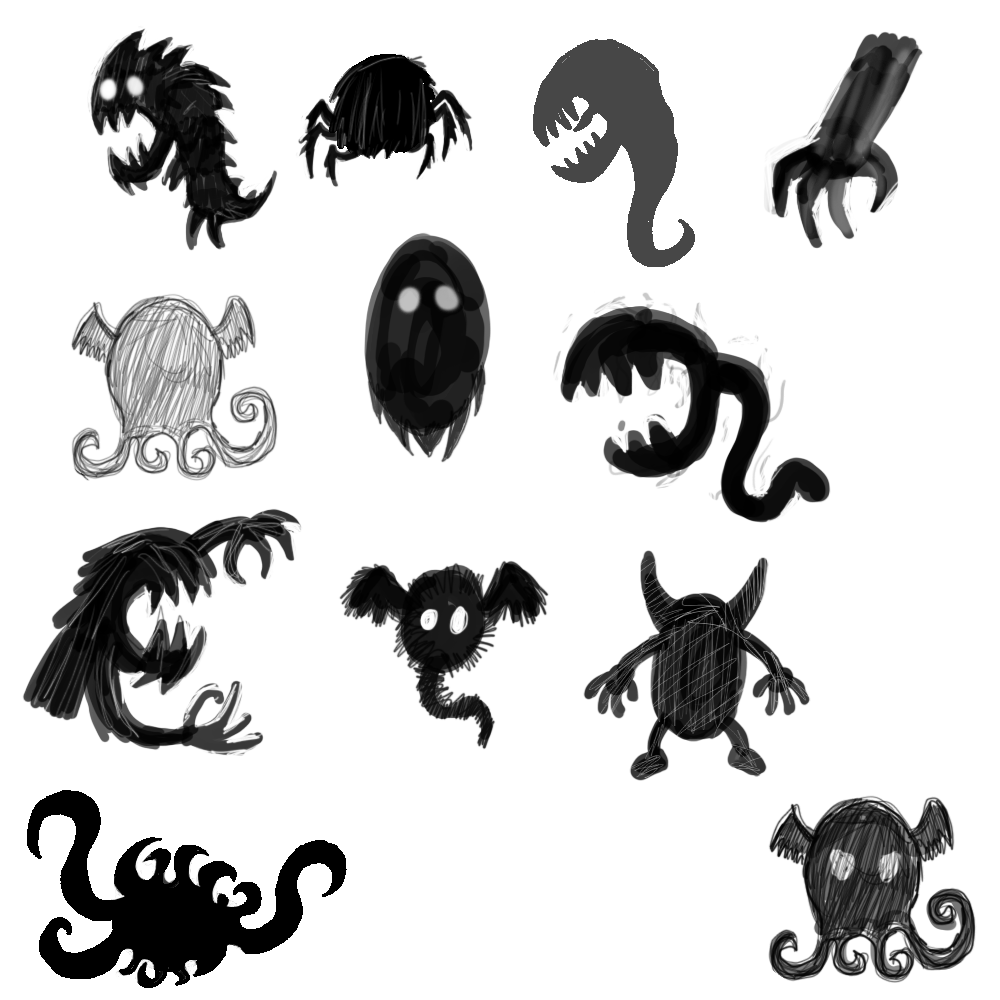 It was a nice idea and illustrating those storybooks (think early Disney Classics intros) got a thumbsup from our main artist. Sadly, in the end we had to scratch the idea because it would have simply demanded too much time and effort designing all those monsters and making the graphics for them. To keep the game seemingly endless, we would have needed to make dozens of those storybooks!

So, then we narrowed it down to "a few" different types of monsters and three seemed like the perfect number for it. We wanted to give them some differences, so that the player would need to use a different strategy for each. Since the player only had one "attack" though, we had to keep it very simple. We could adjust the speed the monster came, how much light it could handle and how much courage it would take if it hit Alina.

The Ghost monster was the easiest and one of the first to appear in any of our concept art. It is the fastest out of the three monsters, but it doesn't bite that hard and is killed instantly by light. Easy kills, but if they come at multiple directions all at once, the player could deplete their batteries soon if they are not careful.

There's no creepy horror game without some tentacles, right? :D At first we were discussing that the tentacle would be some eldritch horror type of thing that could not be killed, but that would slowly just approach Alina to strangle her. It could only retreat when pointed at with the light. In the end, our monster-designer deemed that the ultimate monster crown belonged to the bogeyman, so the tentacle got a bit of a downgrade. Still, it opens its curl slowly, but with enough light it will be destroyed.

The bogeyman under the bed ended up becoming our game's mascot! With its maniac grin and sharp claws it is creepy (but also called cute by some) and undying. It will slowly extend its arms towards Alina and light will only make it retreat. At early design meetings it would retreat when it got lit anywhere, but we quickly noticed that as the arms come around from both sides, they would be hit with light  pretty much every time the player flicked the flashlight on. But since the monster has such a visible face, we decided that shooting light into its eyes (or in the direction of the head, more precisely) would make it retreat. This was a good call all in all, since the bogeyman is the only monster that has a spawn point directly below Alina.

After settling on concepts for these monsters, our Creative Director started to work on animating them. With our handpainted artstyle, the animations were done as sprite animations, needing quite a few spritesheets to give them enough detail in movements. To keep the kinda rough and sketchy end result, the animations are slightly jagged on purpose. Our monsters can't be smooth! :D

In the end, I'm very happy about how our enemies turned out. They blend well with the art and are scary enough, but not too much. Now just hoping to show them in action soon!